A Lesson Worth Sharing

"An idea not shared, is just another passing thought" - Unknown

Something amazing just happened to me! And if it wasn't for amazing individuals sharing powerful information and using the technology of social media to share this information, this experience never would have happened.

Here I was, just sitting in my office, reading blogs in Feedspot (my new RSS Feeder that replaced Google Reader), when I came across a particular blog post that grabbed my attention.

Richard Byrne, author of Free Technology For Teachers, wrote a blog post titled, "A Lesson In Overcoming Obstacles".  In his blog post, he shared a very powerful and inspirational TEDEd Video titled, "There's No Dishonor in Having a Disability, by Steven Claunch.

What happened next, was something that took me by surprise.  A few minutes later I received a notification on Twitter that I had two new Interactions.  When I checked my Interactions, I saw that someone had ReTweeted and Favorited the Tweet that I just posted.  This is what I saw: 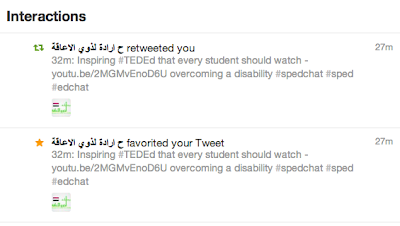 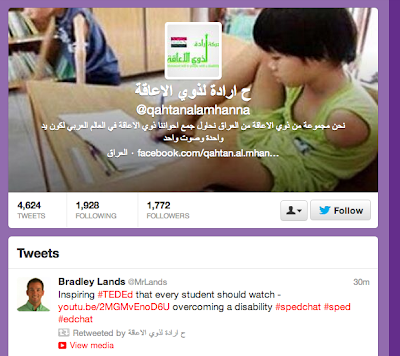 I was speechless!  I cannot imagine how much my Tweet meant to this person with a physical disability.  I'm sure that the video that I shared resonated with this person in a way that I cannot even begin to comprehend.  The fact that this person ReTweeted my Tweet and Favorited it, leads me to believe that this person truly valued the message of the video and probably even gained a sense of motivation and inspiration.

What I realized is, that there was a series of events that lead to my Tweet reaching this person.  The fact that Steven Claunch had enough courage to battle his disability and to tell his story on TEDEd is nothing short of amazing.  Secondly, was the fact that Richard Byrne connected with that video in a way that empowered him to write a blog post, explaining his personal connection to the video.  And finally, the fact that I follow Richard Byrne and believed that the video he shared was something that every student should watch, empowered me to Tweet this video to share with the rest of the world.

However, none of this would have been possible without the technology of social media.  Without using tools such as YouTube, Blogger, and Twitter, this person would have never been inspired by this message.