When Time is a Constant, Learning is a Variable 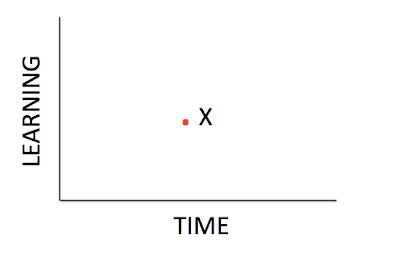 I believe that there are three ideas to consider regarding "time" in education.

1.  Let's take a closer look at the first idea


"I find that the problem with math education is the sink-or-swim approach.  Everything is rapid fire, and the kids who get it first are the ones who are rewarded.  So there comes to be a feeling that there are people who can do math and there are people who aren't math people.  I think that extended amount of time gives you the chance as a teacher to explain things, and more time for the kids to sit and digest everything that's going on--to review, to do things at a much slower pace.  It seems counterintuitive but we do things at a slower pace and as a result we get through a lot more. There's a lot more retention, better understanding of the material" (Gladwell, 2008).


Explanation:  In this example, Malcolm Gladwell is quoting Corcoran (a math teacher).  Gladwell (2008) argues that the extra time gave Corcoran the chance to make mathematics meaningful to let his students see the clear relationship between effort and reward.


2.  Let's take a closer look at the second idea


Explanation:  It's not surprising that students in Asian countries such as China, South Korea, and Japan perform well on standardized tests and are able to demonstrate mastery of learning.  These students not only attend more days in school throughout the year, but their school days are also longer.  Therefore, it can be concluded that there is a positive correlation between the amount of time spent in school, and the average score on standardized tests.

"The wealthiest kids come back in September and their reading scores have jumped more than 15 points.  The poorest kids come back from the holidays and their reading scores have dropped almost 4 points.  Poor kids may out-learn rich kids during the school year.  But during the summer, they fall far behind" (Gladwell, 2008). "Alexander, in fact, has done a very simple calculation to demonstrate what would happen if the children of Baltimore went to school year-round.  The answer is that poor kids and wealthy kids would, by the end of elementary school, be doing math and reading at almost the same level" (Gladwell, 2008).

Explanation:  "When it comes to reading [and math] skills, poor kids learn nothing when school is not in session. Virtually, all of the advantage that wealthy students have over poor students is the result of differences in the way privileged kids learn while they are not in school" (Gladwell, 2008).  In other words, poor students often do not participate in learning activities or programs when school is not in session, such as summer and winter break.  This inactivity of learning eventually leads to learning gaps down the road.


3.  Let's take a closer look at the third idea

There was a questionnaire made up of 120 questions that was given to students all over the world.  Research was conducted that compared the scores of the questionnaire, to math scores on the TIMSS Test.  The finding from this experiment is very interesting:

"Countries whose students are willing to concentrate and sit still long enough and focus on answering every single question in an endless questionnaire are the same countries who have students do the best job of solving math problems" (Gladwell, 2008).  "So which places are at the top of both lists?  The answer shouldn't surprise you:  Singapore, South Korea, China (Taiwan), Hong Kong, and Japan" (Gladwell, 2008).


Explanation:  "We sometimes think of being good at mathematics as an innate ability.  You either have it or you don't.  But to Schoenfeld, it's not so much ability as attitude.  You master mathematics if you are willing to try.  That's what Schoenfeld attempts to teach his students.  Success is a function of persistence and doggedness and the willingness to work hard for twenty-two minutes to make sense of something that most people would give up on after thirty seconds" (Gladwell, 2008).